ICC was founded by Ravi Chandran and his wife Lillian Leow in July 2002. They felt the inclination to start an interdenominational English language church in Copenhagen to reach out to a broader spectrum of the community. From humble beginnings, today the congregation has local and international members from all walks of life.
We are still in contact with those who had temporary postings in Denmark and moved on.

Therefore, ICC is also serving a wide network of contacts among Christians and churches around the world.Nationally, ICC works in co-operation with the national church governing bodies. ICC is a registered entity under Danish church ministry with tax deductible rights and legal permission to conduct weddings. Internationally, we are involved in missions with partners whom we have strong relational ties with.

The vision of the church is to help people get in touch with God others and their divine destiny. This is in accordance to our Lord’s command to love God with all our hearts, mind, soul and strength and to love our neighbours as ourselves. The church aspires to do this in the most practical and down to earth manner.

We strive to be spiritually natural and naturally spiritual in the process.The church is governed by a board and financial council. Ministries and home groups are co-ordinated by volunteers.

Everyone in the congregation are encouraged to be involved in their individual capacities. Ravi and Lillian are originally from Singapore. They came from Hindu and Buddhist backgrounds respectively and became the first in their families convert to Christianity during a period of revival in Asia in the seventies and eighties.
They became missionaries and travelled widely to over 60 countries in Asia, Africa and Europe. They met in Uganda and subsequently married in 1989. Today, they reside in Denmark with their two sons Prince and Josiah.

Ravi has two Ph.D degrees, one in Theology and another in Counselling. Lillian is a Masters Candidate in Biblical Education. 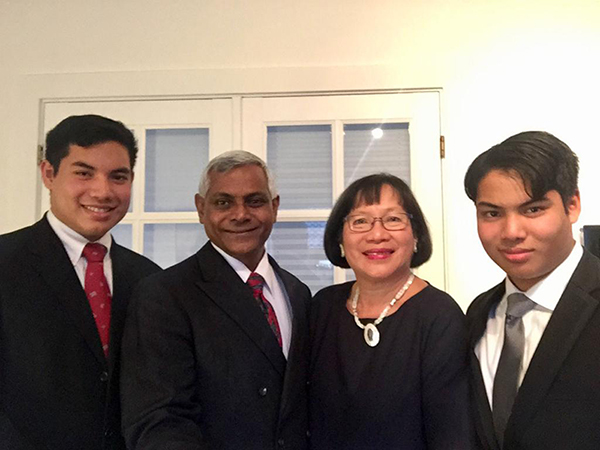 Ravi Chandran and his family